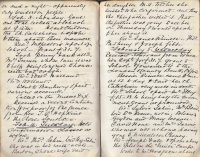 Received warrant from Education Department for £31. 7. grant to school and forwarded it to the London County Bank, Oxford.

Bessie Rimell came to me at 12 today and said her church catechism very well indeed.

Visited school and paid Mr Elley £15.13. 6 being half the government grant as promised.

Visited Sylvia Sabin, Mrs Bond, Widow William Keene, not in, Solomon Geydon and Mary Weaver, David Hone and Mrs Jarvis who was not at home having gone to Middleton Cheney.

Visited Joseph Dale and spoke about the split in the “Union” camp.

Wrote to Mr Hodgson about the girl Barton and also to her Mistress. Wrote to Rev O. Mordaunt Hampton Lucy and told him that William Spicer had come of his own accord to my confirmation class.

Distributed notices of Sermon on Sunday afternoon next by Venerable Archdeacon Daykin of Durban (Peter Maritzburg?) on behalf of the S.P.G. I had written for them to Mr. Slatter of Milton-under-Wychwood and told him that owing to the weather and depression of the agricultural interests, I did not expect either a large congregation or even the usual amount of offertory.