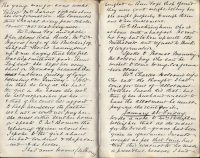 Wrote a note to Mrs Pettipher telling her that as the order for the brick-grave had been given in ignorance I would accept no fee this time, but that this was not to be made a precedent, because I had no right to abrogate any fees customarily and lawfully payable to the Vicar of Sibford. I wrote in the 3rd person, but politely, to mark my sense of the impropriety to say the least, of her behaviour to me on Saturday and of what she said about the contribution, or rather voluntary rate for church expenses.

Mrs Way called to ask how long I had had the Slinket as her mother had paid rent and taxes for it up to Michaelmas last and was about to settle with Mr Hitchcock.