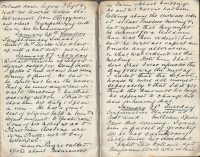 Confirmation classes as last week. William Spicer came this evening. I gave him a parcel of grocery as he has earned very little since his accident.

Visited Thomas Holland and Benjamin Aris who is laid up with bronchitis. Gave him some wine, soup and a flannel shirt.

Visited Mrs Coles and spoke about her servant, the girl Robinson, who is old enough for confirmation, but is at home now suffering from chilblains.

Dr Routh called and spoke about a farmer named Goffe who would like to have the Heath Farm and wished to have some sort of understanding about it. I told him that individual trustees could not do more than say a surveyor’s report would soon be received and a meeting of Trustees held when the business could be gone into.