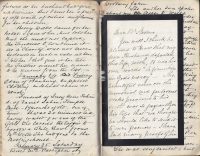 Dean of Banbury supplied clothing in school room as usual.

Funeral of Lucy Ann Sabin daughter of Daniel Sabin, Temple Mill – 17 months old – one of twins. It was 20 minutes late, having waited for one of the girls who carried the coffin to borrow a white shawl from Mrs Wells who had gone to the Meeting-house.

Letter from Anne Pettipher pasted into the diary:

You will I think be pleased to know that my dear Husband departed this life with, to use his own words “A firm hope in God’s mercy”. The beautiful verse on the memorial card for several weeks previous to his death was so frequently on his lips that we thought we should like to send it to our friends. I have had many proofs of his sincere repentance.

He was not a man who could give expression to his feelings, especially to a comparative stranger. He was most earnest in his devotions during Family Prayer – insisting on kneeling till quite obliged to give up doing so.

I have had very nice comforting letters from every clergyman who has known him at Sibford – expressing their sympathy with me in my hour of trial and others’ sorrow at hearing of his death.

He kept up his naturally jocular manner, when in the presence of Friends and Neighbours to the last and endured his afflictions with extraordinary calmness – owing I suppose, partly to his great strength of nerve and uncomplaining temperament.

He thought you would think it strange we did not send for you, but considering his having been all his life a regular communicant, neither he nor I thought it necessary.