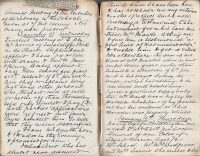 Trustees Meeting at 2 pm, Mr Norris of Swalcliffe Park in the Chair. Stephen Hands applied to have his notice withdrawn, and Frederick Inns and Henry Bishop applied to have their school fee fixed at 1d instead of 3d per week – their chief complaint being that some other persons who, they said, were as well or better off than themselves were only required to pay 1d. Both parties’ applications were refused and Canon Payne handled them so well that they retired discomfited.

Drove Mr Smith home to Brailes in the evening and preached for him.

Joshua Aris who has almost never attended Church since I have been here and has not shown me any outward marks of respect sent a note enclosing a testimonial which he had received from his late mistress, Mrs Mawle, asking me to give him a testimonial “a few lines of recommendation” to enable him to get a situation elsewhere. He gave up his place at Mrs Mawles’ where he had worked seven years rather than submit to a reduction of 6d per week in his wages during the winter, and has had nothing to do ever since worth mentioning. I wrote a few lines saying only that Mrs Mawle was a highly respectable inhabitant of my parish and that her evidence as to his character was perfectly reliable.