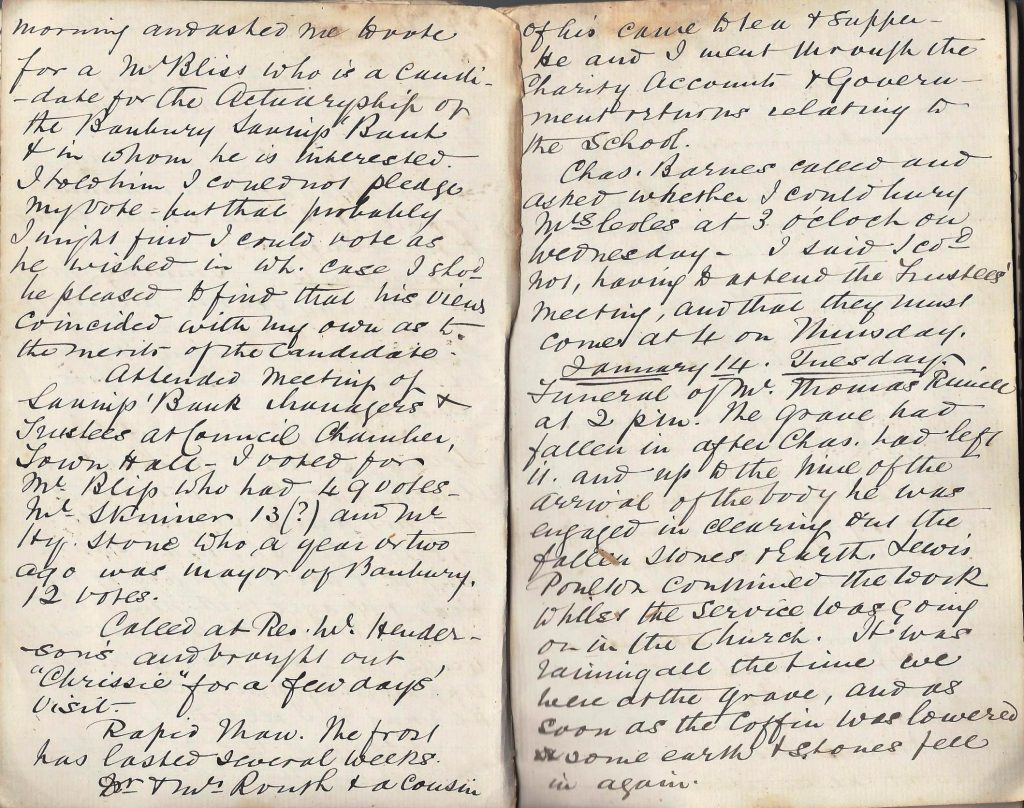 Funeral of Mr Thomas Rimell at 2 pm. The grave had fallen in after Charles had left it and up to the time of the arrival of the body he was engaged in clearing out the fallen stones and earth. Lewis Poulton continued the work whilst the service was going on in the church. It was raining all the time we were at the grave, and as soon as the coffin was lowered some earth and stones fell in again.

Annual Meeting of the Members of the Library in the school room at 7 this evening. Not many were present.

From the Banbury Guardian

LENDING LIBRARY-The annual meeting of the members of this institution was held at the Endowed School, Sibford Gower, on Tuesday evening the 14th inst., the Rev. Edw. T. Stevens, president, in the chair. The report showed that during the past year the circulation of books amounted to 3,088 volumes. and the subsciptions of members to £12 15s., whilst a total sum of £28 0d. 10d. had been received from grants and donations, besides more than 100 volumes of various kinds of wholesome literature. The total expenditure had been £35 9s. 6d., thus leaving a balance in hand at the close of last year of £5 6s. 4d. There are now over 400 volumes in the library, which will soon be increased by new purchases. Votes of thanks were accorded to Mr. Geo. Turner and Mr. Hy. Elley, the librarians, and to Mr. John Enock, the treasurer, for their services during the past year, and they were requested to retain office for the current year. A vote of thanks was also accorded to the ladies of the committee who managed the inaugural tea meeting in January last, this year’s social gathering being postponed till Easter next on account of the inclemency of the weather. The five retiring members of the committee were then re-elected, and a vote of thanks awarded to the president for his efforts in the carrying on of the library.