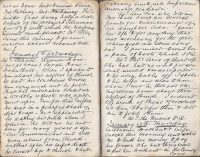 William Holland’s wife called this morning and asked me to lend her money to pay her grocer who has threatened to put her husband in the County Court. I told her I had found it necessary to make a rule against doing anything of the sort. Her husband was at work and earning regular wages and it was his business to pay his way. She said he had been ill some time ago. I told her that he was not ill for long and that when he was well he would not get up in the morning to go to his work. She replied that that was the case and she repented having had anything to do with him or his father. I reminded her that none of them ever came to church, and that she had brought herself into trouble by her own wickedness. She had two bastard children in the Banbury Workhouse and then came out to live with her present husband long before she was married to him, living with him, his father and her two children in a wretched place with only one bedroom.