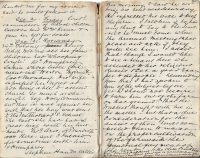 Visited Humphrey Sabin whose little girl went into Horton Infirmary last Monday. His wife expressed her regret at not being able to attend church so much as she ought especially Holy Communion – and that it was against her wish that her boy was sent to the Methodist Sunday School. She said she had had a great trial with her husband. Thomas Aris, Of Burdrop, was there – and I talked for some time with him & Humphrey.

Stephen Hands called this morning and said he would bring his rent next Saturday. He expressed his wish to keep the farm – I told him if he had anything to say to the Trustees he must come when the Annual Meeting takes place and ask if they will see him. I added that though I would like to see a tenant there who attended to his religious duties and set a good example to the people – reminding him that I had spoken to him of the subject before – yet I should not desire to turn him out of the farm on that ground – that the trustees thought with me in the matter – but that a due consideration for the duties of their trust compelled them to insist on the proper cultivation of the farm and the punctual payment of the rent.