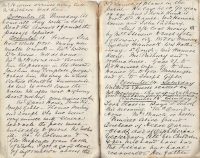 Visited Mr Hiorns and showed him the passage in the Award – lent him my “Complete Lawyer” to show him the way in which Vestries should be summoned. He said he would leave the matter till after next Highway Board meeting.

Visited David Hone. Soldier Simmons was there – Miss Dix – Joseph Gibbs – Thomas Manning and Joseph who has been very unwell with severe headache the past week but is able to get out. He looks ill.

Visited W. Coleman and George Messenger from latter of whom I got a good deal of information about the old names of places in the parish. He says he is 90 years of age, but I don’t think it.