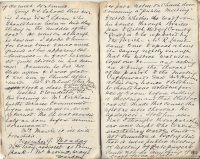 Mrs Way assisted at Penny Bank. Mr Hiorns, way-warden, has put a notice om church door convening a “public meeting” to settle whether the road from his house through Brailes Lane and Ditch Hedge (County Road) is to be repaired by the Parish. Mr R Lamb came to me to speak about it – saying rightly enough that the notice was not a legal one, etc – and asking me to bring the “Award” of the parish to the meeting. I afterwards saw Mr Hiorns at his own house and told him he should have asked me for use of room before calling a meeting, and that the reasons which made this course the right one were obvious. He apologised. I told him also that I thought those parishioners were right who considered the Way Warden could not summon a Vestry. And that a mere public meeting or meeting of Ratepayers could not do anything of legal force at all.

Drove to Banbury today to bring Rosa out. The roads were very slippery. Self, Mrs S and Rosa called at Mr Henderson’s Christ Church Vicarage. He was not at home, but we saw Mrs Henderson and Mrs Ford.

Called to enquire after Mrs Mawle.