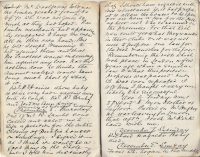 One of Mr. R. Lamb’s sons called and asked me to sign a petition for the entire closing of public houses on Sundays. I signed it as I think it would be a good thing on the whole – but I told him distinctly that I should have signed it with less reluctance if it had proposed to allow the houses to be open for an hour or two for the sale of beer not to be consumed on the premises. For that Rich men could get what they wanted in their Clubs and it was not well to propose one law for the rich and another for the poor. Remembering the riots which took place in London a few years ago when a similar law to what this petition proposes was passed but which was soon repealed I told him I thought it very unlikely to be successful.