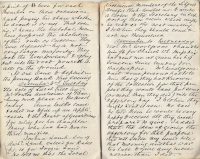 Visited Mr Woolgrove and handed him 1/6 for Church which Miss Dix had sent me as given her by someone since Sunday for that purpose. Mr Woolgrove said some persons had told him that if they had known of the collection for that purpose they would have put some (or more than they did) into the offertory bag. I told him they might send it now. He said he told them he would be very happy to receive all they were prepared to give. I added that the idea of giving the offertory for that purpose did not enter my mind till that morning and that was too late to give any more notice than I did.

Mr. Woolgrove told me the timber fetched from £60 to £70 which was not quite so much as they had hoped. The timber merchants had apparently conspired to have the sale all in their own hands. But he told Joseph Manning to bid against them and that the Trustees would indemnify him against any loss. Had this not been done he thinks the amount realized would have come much short of what it is.