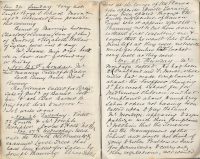 Mr Montagu called. He had been to C Poulton’s and F Inns’s, whose wives had made complaints about the Feoffees charging 3d per week school fee for tradesmen’s children and had complained about Humphrey Sabin and others not having been called upon to pay the same. Mr Montagu appearing to sympathize with their complaints I told him that the Trustees had the management of the school and would not think of going to either Poulton or Inns for permission to carry out their regulations, nor would they think of consulting them as to who should and who should not be required to pay 3d or 6d school fee. I very mildly gave Mr M to understand I thought him rather weak to let them talk to him about such matters and get his sympathy where no sympathy was needed. On his own showing he had not reproved them for their exhibition of jealousy because others were not called upon to pay as much or more than themselves. As to Poultons, they have only one child, a few months old, so that it will be years before the regulation will affect them.