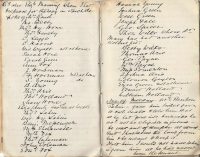 Visited Reuben Sabin – gave him ticket for 10 cwt coals and told him that as he had gone into business he would not be eligible in future – he was out of temper as usual – said I had taken the land from him and he meant to keep it. I told him I could not have taken it from him as he had never been the tenant. He said he had consulted a solicitor who had offered to see him through it. I told him he had probably not stated the facts to him correctly – and recommended to him not to be foolish and burn his fingers.