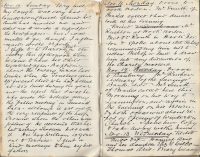 Winderton Church opened. Mr Smith had invited me and asked me to write a report for the newspapers – but I was unable to go, though I afterwards wrote reports.

I spoke to W Barton Senior in the vestry this afternoon when he came to have his child registered after Baptism, about the outcry made last winter when the Trustees gave 2/6 for each child who had attended 250 times during the year and the report that it was he who wrote the notices calling the “public meeting” in Tennant’s Barn – although he was one of the very recipients of the half-crowns whom the others were jealous of. He declared that he had nothing whatever to do with it. His boy William is gone out to service. I sent a kind message to him by his father.