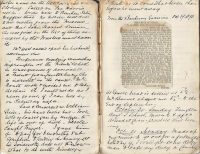 Made up my mind to go out for a fortnight’s holiday if I could get some clergyman to take my duty in church next Sunday. Called on Rev Hooper and Rev Egeston of Bloxham, but neither of them knew of any one who could help me. Called on Mr Yeoman a clergyman disengaged living at West Street, Grimsbury whom Mr Montagu recommended. He said he could come, that he had a license from Bishop of Oxford. I arranged to send a carriage for him on Sunday morning next, and that if the weather be favourable he should walk home. I had previously called on the Rev Mr Johnson, one of the curates of the Parish Church to ask where Mr Yeoman lived. He told me that Mr Y had been “sub nube” but that post experientiam, Mr Back and Mr Spittall had recommended him to the Bishop who had in consequence granted him his licence. I had previously heard Dominum Yeoman a conjuge separatum tempus agere.

Left Banbury about 3pm, arrived London at 6. Left Ludgate Hill at 9.15 for Paris. Ticket for 7 days return £1.13.6.  2nd class Rail and Saloon Steamer. I had registered my name at Cook & Sons for accommodation in the Hotel San Petersbourg, 35 Rue de Caumartin for 6 days at 12/- per day. We left Dover by, I believe, the Maid of Kent, at 12, midnight. The weather was very rough, so that instead of arriving at Calais at 11.30, we did not arrive till 2.40. At 3.20 we left for Paris where we arrived at 10.15 on Tuesday morning October 22nd. I drove at once to the Hotel San Petersbourg where I stayed during the time I remained in Paris and found it extremely comfortable. From London to Dover I travelled with Dr Barnardo and from Calais to Paris with a Mr Lonsdale, an artist. Visited the Exposition Universelle  this afternoon.

sub nube: under a cloud

Dominum Yeoman a conjuge separatum tempus agere: Father Yeoman has been separated from his wife for some time.