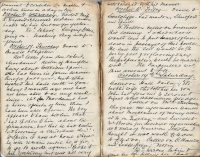 Called on Hall Tailor; Eli Webb’s wife who told me her son John had gone out to service and signed total abstinence pledge.

Called on Mrs Shelswell who gave me information wanted about investment of money alluded to on Tuesday – and I wrote to Mr Brown for decisive information as to value of reversion. I told her I thought it was worth £4000 to £4500.

Called on C. Hands, and Jesse Green; not in.

Visited Widow Sabin and gave her 10/- telling her I had put her name on the list for coal and clothing. Called on John Harris not in. Wrote note to Reuben Sabin to effect that no notice was due to his mother from the trustees and that John Harris Senior – who was first on the list of those accepted by the Trustees must have it.

Temperance meeting somewhat impromptu at the Friends’ School in consequence of arrival of a Friend from Canterbury who is interested in the cause. Mr Routh wrote and invited me to take the chair which I could not do as I never go out, if I can help it, on Saturday nights.

Saw and conversed with William Spicer – his hand looks bad – took hold of loaded gun by muzzle to lift it out of ditch – nettle caught trigger. I gave him 1/- to pay for 6 months subscription to Lending Library as he evidently does not know what to do with himself. I think he is somewhat better than before he went away.

THE PRICE OF BREAD.
To the Editor of the BANBURY GUARDIAN.

SUR:—I har bin tould that the last few wicks folks has bin righting to the Bambury paper abowt the price o bread, but allow I to tell you and your raders as how Banbury folk aint the wost off. Now, for som on us ha to pay a penny more a 4 pun lofe nor they doo, lestways us did last Fridy. Now, sur, I bent much o a rader, but I happned tother day to calp my hies on a bit in the Bambury paper abowt the Bakers in that town selling their 4 pun loaves at 5½d. a piece. So I rades it to my missus, and I ses, Sally, ses I, sum o our Sibherd bakers, and one o the out town uns as come into Sibherd claps a penny more a 4 pun lofe on us nor them there Bakers at Bambury charges. Ah, Sally ses, you see us be a bit outlandish here like, so as them there Bakers round Swalkley and Sibherd dont hardly know when to sink the price of their Bread. But I ses, Sally, I thout as how these Bakers allus went by the price of the Bambury Bakers. Oh, ah, so they does, ses she, when the Bambury uns rise the price, but not ofen when they sinks it. Well Sally, I ses, tha aint hardley fair loike for Sibherd folk to gie 6½ a 4 pun lofe when Bambury folk, oney seven miles away, can get as good bread for 5½. So Sally, ses I, heres another asill write to the Guardian like them tothers did, and let em know how Sibherd folks be sard. And I be sure, Mr. Editor, both me and Sally hopes youll jest insert this in your coloms, and you will greatly oblige.

At Epwell bread is selling at 5½d. Mrs Barnes charged me 6½d – to the end of September,