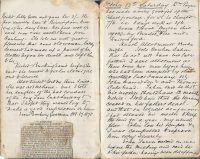 William Payne has made a very good job of the school frontage – for which he charged 7/6, ie 3 days work at 2/6.

Drove to Hook Norton this afternoon by Brailes First Hill and Traitors’ Ford.

Heath Allotments rent night. I told Reuben Sabin that he could not have his late father’s 2 acre allotment as there were two men before him who had been accepted by the trustees last January, viz. John Harris Senior and Thomas Cakebread. Sabin said he thought his mother should have 12 months notice. I told him that the tenancy ceased on his father’s death – and that on request as a favour I had allowed his mother to keep the land for a year – my usual plan. Sabin lost his temper and I was compelled to reprove him very severely.

Esau Tarver called on me before the meeting and said he and his father, having been disappointed in receipt of money due to them would not be able to pay their rent till Tuesday or Wednesday.

Eliza Lamb, wife of John Lamb, called this morning and asked whether the Heath farm would be vacant – as her son in law who was occupying a farm at Chipping Warden Would like to be a candidate for it. I told her that the Trustees would probably advertise for a tenant before the farm became vacant and that he could then apply. I could not give him permission to go over the farm.