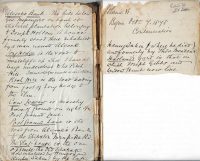 I gave them to understand that I did not refuse the room for a total abstinence tea-meeting – but that I should have to consult the trustees before granting it. If however the meeting was to be an open one for the promotion of temperance or even total abstinence I could let them have it on my own responsibility. I said I had already for some time been thinking of establishing a branch of the Church of England Temperance Society in Sibford but having been occupied recently with the library, Penny Bank, etc I had not been able to make a commencement. I advocated the establishment of a Comprehensive Temperance Society having one section and pledge for Temperance and another for total abstinence.

My views were not acceptable to Miss Capper, Mr Routh and the Tarvers; and Miss Capper spoke so strongly against temperate persons who would sign a pledge of total abstinence that I was obliged to remind her that the charge had been brought against total abstainers of “taking out their intemperance in the way of language” – but that I hoped it was not true.

The final result of the discussion was that a tea should be provided on Friday next to which all should be invited – Tickets, adults 8d, Children 4d – Ladies of my congregation as well as Quakers to be asked to “take tables” – myself to be chairman – the question of Establishment of Association to be deferred.. Mr Bayliss of Banbury and other temperance advocates to be invited to come and speak.

Called on Miss Dix and asked her to “take a tray”.

The inside front cover of Volume VI of the diaries describes several locations in the Sibfords, as follows:

Alcock’s Bank. The hill below George Messenger’s on bank of which is larch plantation belonging to Joseph Holtom. A house formerly stood there inhabited by a man named Alcock.

Long Hedge is the road to Swalcliffe up what I have always understood to be Pitch Hill. I think old George made a mistake.

Pitch Hill is the road leading from foot of Long Hedge to the Elm.

Cow Leasow is marshy piece of ground on right of Pool Ground Lane.

Pool Ground Lane is the road from Alcock’s Bank to the Shipston Turnpike Road.

The Slat House is the one opposite the Old Vicarage now inhabited by Hancox and Reubin Sabin; by the late Henry Sabin (where he died) and formerly by Thomas Meadows.

Hadlands Yard is that in which Joseph Gibbs and Widow Hunt now live.