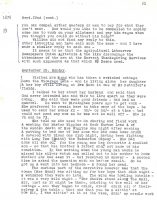 Visited Mrs. Bond who has taken a wretched cottage down the Vicarage Lane – and is living alone her daughter and her boy still living at New Barn in one of Mr. Pettifer’s fields.

I talked to her about her husband and said that God never intended Man and Wife to live apart as they were doing. She said they were good friends – had had no quarrel. He went to Birmingham years ago to get work while she preferred to remain here to take care of the boys. He used to send her money £1 – 30/- or 50/- at a time but could not send any now as he was not so well off. She is 74 and he 73.

She told me she used to do charing and field work and washing for Master Wiggins at Hook Norton Leas and of the sudden death of Mrs Wiggins. It happened one night after washing and putting to bed one of her sons who had come home drunk and covered with blood one Club night, having been fighting with Long Tom (Smith) the Tadmarton Gipsey – She had done all she could for the young man, her favourite and spoiled son – so that his brother and father should not know of his condition. In the morning when the young man awoke he missed his silver watch and called out to his mother, to know whether she had seen it – but received no answer. A second time he asked the question with no better result. So he got up and went into her bedroom and found her dead.

The curious part of the narrative however, was that the woman, (Mrs Bond) was sitting up for her boys that club night – and wondered they were so late. The wind was howling outside – it was a very wild night – “The chairs stood along the wall, Sir, just as it might be there”, pointing to the wall of her cottage – “and they began to crack, crack, crack all o’ theirselves and the table, that one that you be a sittin’ at now, Sir, I was sittin’ at it at the time, doin’ my needle work and it lifted itself up and stomp’d on the floor till what wi’ the cheres a crack crack crackin’ and that ‘ere table a stomp, stomp, stompin’ I was so frightened that I felt amost afeard to stay in th’ouse. I wanted to go and look arter my boys as was at the Club but I didn’t like to go ‘long acre ditch fear I should meet summat. But knew as sommat bad was ‘appenin’ and next mornin’ I heard as ‘ow Mrs Wiggins were found dead in her bed by her son as cum home drunk and bleeding the night afore.”

The poor old woman had a piece of a very little book – containing Christian Maxims etc. in the form of verses – which she had been reading a bit.