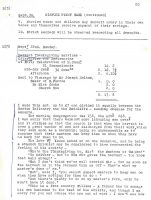 I made this amount up to £7 and divided it equally between the Horton Infirmary and the Radcliffe – sending cheques for the amounts.

The morning congregation was 158, the afternoon 248. I was sorry that there were not more labouring men present and it strikes me the reason is that when the harvest is over a great number of men are discharged from their work, which they look upon as a hardship; being so unreasonable as to suppose that their masters can keep them on when they have no work for them to do.

The late William Keene asked me on one occasion, and he being a staunch Unionist may be considered to have represented the feeling of his society –

“Who’s the Thanksgiving to, Sir? the Masters or the Men?”

“But I don’t think we’re well treated, Sir – for as soon as the harvest is in the farmers turn us off – That’s what my Master’s done o’ me.”

“But”, said I, “you cannot expect masters to keep men on when they have nothing for them to do.”

“But there’s plenty to do on my master’s farm, only he won’t have it done.”

“This is a free country, William – a farmer has to manage his own business to the best of his ability, and though I am sorry for you and the others who are out of work, I don’t see how you can compel either masters or men to pay for what they don’t want. How would you like it to be compelled to employ someone to work on your allotment and pay him wages when you thought you could do without his help?”

William did not have any reply to this. Other labouring men have said much the same and I have made a similar reply to each one –

It seems to me that the Agricultural Labourers Newspapers Union Agitators and the like discourage the attendance of the men at the Harvest Thanksgiving Services with such arguments as William Keene used.