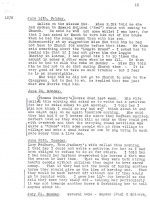 Lucy Padbury, Thomas Padbury’s wife called this morning. I told her I could not write a petition for her as I had been obliged to refuse to do so for others. I told her I had heard her husband overworked his horses and that was the reason he lost them. That as they were both strong hearty people without children they ought to have saved money. That if they had not the means of buying another horse they should give up the idea of keeping one. That they would be much better off without one if they would go to regular work. I gave her 10/- for herself as she said they were very badly off – telling her particularly it was not towards another horse and forbidding her to tell anyone about it.