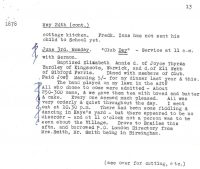 Dined with members of Club. Paid Joseph Manning 5/- for my dinner, last year and this.

The band played on my lawn in the afternoon. All who chose to come were admitted; about 250 – 300 came and we gave them tea with bread and butter and cake. Everyone seemed much pleased. All was very orderly and quiet throughout the day. I went out at 10.30 p.m. There had been some fiddling and dancing in Kaye’s yard – but there appeared to be no disorder and at 11 o’clock not a person was to be seen about the Village. Drove to Brailes this afternoon and borrowed P.O. London Directory from Mrs Smith, Mr. Smith being in Birmingham.

CLUB FESTIVAL.  –   The Anniversary of the Sibford Club took place on Monday, June 3rd. The members met at the Schoolroom at nine o’clock to transact the business of the society, after which they marched to church, and an excellent sermon was preached by the Vicar, the Rev. E. T. Stevens, after which, the members, to the number of 78, sat down to an excellent dinner provided by the stewards. In the afternoon the band paraded the village. At nine o’clock the meeting was closed. The day passed off very quiet and orderly. The receipts of the society for sick for the twelve months were £74. 8s.; payments for sickness, £71. 3s. 6d. The Society funds in the Banbury Savings’ Bank are £364. 10s. 4d: in treasurer’s hands, £6. 2s. 3d;  total funds of club £370. 12s. 7d. The Club now consists of 127 members, and the gain to the funds for the twelve months was £13. 18.

To the Editor of the BANBURY  GUARDIAN

Sir,  –  The Season of club festivals is once more at its height, as your columns amply testify, and at the moment I am writing doubtless scores of villages in our little island are the scenes of rural mirth. And why shouldn’t they I ask? Is it not a time when friends visits friends, when the companions of our childhood from whom we have so long, by Time’s rude hand been separated, are brought once more into sweet fellowship with us. Nay, it is impossible but that we should rejoice when kind friends and flowery fields and green waving crops and million-voiced warblers all combine to gladden the heart of man and make this earth a paradise. Well, on Monday week, being the first Monday in June, the Sibford people met in the National Schoolroom of Sibford Gower to celebrate their club anniversary and, although many of our weather prophets in the early part of the day foretold a fall of rain, we had, notwithstanding, a very nice day. The members mustered in good numbers, and having paid their contributions, proceeded to transact the business of the day. This being done, and the Alderminster Brass Band having arrived, we formed a procession and proceeded to the little church on the hill, where we joined in Morning Service and were addressed in a very plain and pathetic manner by the Rev. E. T. Stevens, Vicar, from the words of St. Peter, “And above all things have fervent charity among yourselves.” At the close of the service, the procession, headed by the band, proceeded  to the Vicarage, after which we returned to the schoolroom and partook of an excellent dinner. Subsequently the reports of the society for the past year were read, which showed that the year had been a very successful one, several new members having been enrolled and less money spent on sick members than has been the case in any previous year for a long time. The vicar dined with us, and gave some very good parochial advice. We then left the schoolroom, marched through the village, calling at the Wykham Arms, before proceeding to the Vicarage, being admitted to the lawn, where we were regaled with cake, bread and butter and tea, at which all present seemed evidently delighted. We afterwards called at Mr. H. Hirons’ and a few more places, at all of which we were treated with kindness and respect. Shortly after this, viz., at 9 p.m. the proceedings closed, the band having throughout the day displayed such musical skill and willingness as to secure our confidence and esteem, the members behaving with decorum and sobriety. I will only add that the proceedings throughout were of the most peaceful and orderly character that we have witnessed for many years.