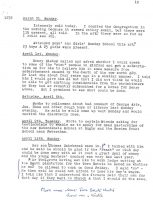 Henry Bishop called and asked whether I could speak to some of the “rich” people in Sibford and get a subscription up for him to relieve him in some measure from embarrassment caused by the death of his cow worth £20. He lost one about four years ago in a similar manner. I told him I would give him £1 but that I did not think he would be able to get anything considerable from the parishioners as they had so recently subscribed for a horse for Henry Lines. But I promised to see what could be done.