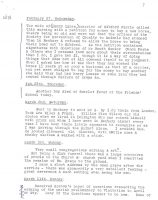 The wife of Henry Lines, carrier of Sibford Ferris, called this morning with a petition for money to buy a new horse, theirs being so old and worn out that the officer of the Society for Prevention of Cruelty to Animals had stopped them in Banbury and refused to allow the horse to bring their load out to Sibford. As the petition contained signatures with donations of Mr. Routh Senior, Canon Payne and others who I presume know more about their circumstances than I do, I gave her £1,  though it is a way of doing things that does not at all commend itself to my judgement. When I asked her how it was that they had worked the horse 15 years at so good a business as that of a carrier, and yet were obliged to beg for the money to buy another, she said they had some heavy losses on some land they rented through failure of crops etc.