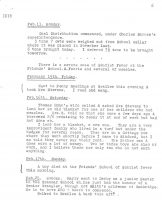 Thomas Hone’s wife called and asked Mrs. Stevens to lend her an old blanket for one of her children who had measles. Mrs. S told me that she came a few days ago and borrowed 2/6 promising to repay it at the end of the week but had not done so.

I lent her a blanket, a new one. They are a very improvident family who lived in a turf hut under the hedges for several years.  They are in a cottage now where they went shortly before I came to Sibford, but I am told they never pay their rent. The father can and does earn a lot of money. Two or three boys are also at work and I believe there are only two who do not earn anything.