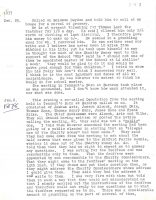 This evening a so-called deputation from the meeting held in Tennant’s Barn at Burdrop called on me. It consisted of Joshua Aris, Joseph Alcock, Joseph Dale, Thomas Hone, Thomas Henry Hone, James Hone and Frank Wilks. The Chief Spokesmen were Alcock, Aris and Wilks. They all denied having written or posted the notice calling the meeting, which they say was not a “public” one.  I told them whoever summoned the meeting had been guilty of a public slander in stating that an “illegal use of the Charity money had been made”.  They said they had come down from the meeting to ask about the half crowns that were given to the Sibford Ferris people, whether it came from the Charity money etc, etc. I told them that they had no right to expect me to answer any questions. I was acting for the feoffees and was responsible only to them. That the feoffees were appointed by and responsible to the Charity Commissioners. That they might come to the feoffees’ meeting on the 14th inst. if they chose and put their questions then, or they might address the Charity Commissioners whose address I could give them. They said they had the address and would write to them. I was very firm with them but told them in such a way that they could not misunderstand me, that I simply carried out the instructions of the feoffees and therefore could not reply to any questions as to what the Feoffees requested me to do. There was a considerable amount of grumbling on the part of several of them, especially Frank Wilks, Joshua Aris and Alcock. I told them their best friends from their point of view were the feoffees and that if any grumbling came to the ears of the Charity Commissioners they would probably bring forward a new scheme to take away all the doles and place the whole of the income of the Charity on the School. I was very firm with them but treated them with civility and with the exception of the half daft Frank Wilks there was not the least incivility on their part.

A large and influential meeting of the inhabitants of this village was held in the School Room, Sibford Gower, in the evening of the 7th inst. to inaugurate the formation of a Village Lending Library, of which some account has already appeared in our columns.  This movement, which was started by the Vicar (The Rev. E. T.  Stevens), was cordially supported by most of the inhabitants, irrespective of religious denomination, and the consequence was that out of nearly every house at least one person became a member of the library.  The Committee of Management was partly composed of ladies, who very kindly gave their services in providing a tea for the members at a small cost, and about 100 sat down together at six o’clock, but this number was largely augmented when the doors were thrown open to the general public an hour later, when the business of the evening commenced.