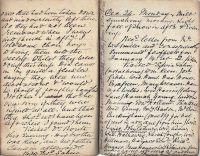 Volume IV of the diaries ends here, but Leslie Baily transcribed what is presumably a continuation from the missing Volume V, appended here.

Mrs Barton told me that Eliza Lamb was very bitter because she (Mrs Barton) had received 2/6 for her child’s attendance at school.  That it belonged to Sibford Gower people and not to outsiders.  I told her to request Mrs Lamb to attend to her own business and not to trouble herself about mine. When Mrs Lamb first heard about the half crowns she said she was not going up to the School for half a crown.  She never put on her bonnet and shawl for less than five shillings.  But when her child came home and said she had not made sufficient attendances for the 2/6 she became very wrath with her neighbours who had received it.