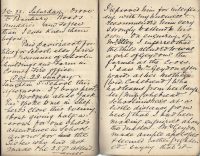 Woodgate alias “Jack Tar” spoke to me in Shepherd’s Close this evening about giving half-a-crown for one child’s attendance in school and not for the sister who had not made the 250 attendances. I reproved him for interfering with my business and recommended him very strongly to attend to his own. On enquiry of Mr Elley I inferred that the child alluded to was a girl of Geydon’s the farmer at the cross.

I saw Mrs Geydon afterwards at her mother’s (Widow Cakebread) who had learnt from her daughter (Miss Cakebread, schoolmistress at a little distance from here) that I had been making enquiries about the matter. Mrs Geydon made ample apologies and seemed rather frightened – saying that it was not her wish that Woodgate should interfere at all. Robert Austin who was present said it was just like him to do so. I told Mrs Geydon that the 2/6 which was given her was given in mistake, as it was not intended for farmers at all. But I would not ask her to return it, though she must not expect it next year. She said she would rather give it me back – I told her I would mark it off in the book and give it her out of my own pocket to divide among her children.

Her brother Thomas Cakebread was there and I asked him whether he thought labouring men could manage more than ¼ acre of land, as a rule if they had it. He said he thought not many would but was chary of giving an opinion. I told him if he would like more to apply to feoffees at the next meeting. He said he would think over it.

Attended choir practice for a short time this afternoon.

Miss Maria Dix had laid banners and other decorations on floor of Sacrarium. I thought they were merely old ones that had been taken down and inadvertently left there. As they had not been removed when I went into church in afternoon I told some choir boys to bring them into the vestry. Whilst they were doing this Miss Dix came in in quite a fluster saying they were new decorations and would be spoilt if roughly handled. I told her I should be very sorry if they were injured at all, but that they should not have been left where I found them.

Visited Dr Routh this evening. His brother was there, and his father came in afterwards.