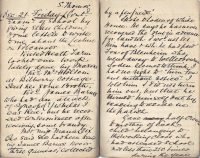 St Thomas. Continued examination of school by giving elder children some letters to write to me about the Lecture on Volcanoes.

Visited Mrs Holtom at Bilberry Cottage. Sent her some broth.

Visited James Barnes who had an attack of syncope(?) whilst I was there, but he recovered consciousness after receiving some brandy.

Met Miss Maria Dix who said she had been sending James Barnes two or three guineas, “collected by a few friends”.

Spoke to Soden of White House. He says he has never recovered the rent in advance for land which I would not let him have and which he had paid Fox of Blenheim who went away to Wellesbourne. Soden seemed to think I had no right to “turn Fox out without notice”. I told him I did not turn him out, but that he turned himself out by ceasing to reside in the parish.

Gave half crown to mother of each child belonging to the working class who had attended school not less than 250 times during the year.