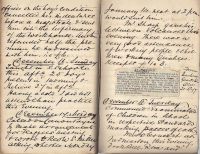 Commenced examination of children in school in respective standards marking passes of each.

Went to concert at Tadmarton this evening. Took Bell, Rosa and Annie Smith. Supper at the Rectory.

Hancox the mason of Tysoe brought two tombstones for churchyard. One to Ann and Temperance Colegrave; the other, a white marble one with gilt lettering to Thomas Edward Colegrave. I inspected the stones before allowing them to be set up. The first mentioned was unobjectionable. The inscription on the 2nd runs thus:— “In loving memory of Thomas Edward Colegrave of Newcastle-on-Tyne. Died at Middleton in Teesdale”, etc. I pointed out to Hancox that there should have been a “who” before “died”. He said that was how Mr Fox sent him the inscription. I told him the omission was not serious enough to induce me to reject the stone, but that he should always submit the inscription to the clergyman before writing it on the stone. He said he knew he ought, for his book told him so; but he thought Mr Fox had submitted it to me. I told him Mr Fox had not done so, and that it was his business to submit such a matter to the clergyman in all cases.