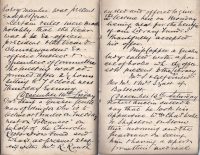 Robert Austin called to say that he took his apprentice William Charles Webb to Shipston on Stour this morning and the Guardians on seeing him and having a report from their medical officer on the boy’s condition cancelled his indentures before a magistrate and sent him into the infirmary of the workhouse. Austin refunded half the premium he had received with him, ie £6.