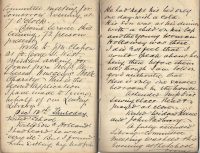 Visited Edward Holland. I had heard he was “very ill”. But I found him sitting by his fire. He had kept his bed only one day with a cold. His son was at his dinner with a child on his lap and the young woman Holloway was there. i did not feel that I could speak about her being there before them all; though I am told on good authority that there is only one small bedroom in the house.

A fully attended Library Committee meeting was held this evening at the schoolroom. Every member was present except Rosa. Certain rules were made, notably that the Vicar was to be ex-officio president and the Vicar and churchwardens ex-officio trustees and members of committee. The meeting was adjourned after 2½ hours sitting, to 7 o’clock next Thursday evening.