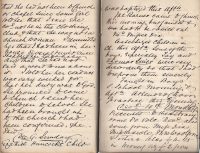 Presented to the Library some 80 volumes. Received also some from Miss Dix, Miss Mawle, Mrs Woolgrove and others. Also £4.15 in money viz £2 from Mrs J Rimell, £1 from Mr Wells, 10/- from Mr Enock, 5/- from Mr R Routh, R Lamb, Miss Enock,  Miss Clarke and Mr Simms. There was a good meeting, all the leading Quakers being present, and most of the church people of the same class.

This morning took names for women’s clothing club, telling them that it was for church people. I had not an unkind word to say against Methodists or others, but as my means were limited so must the number of members of the club be.

Press cutting from the Banbury Guardian of 13 December 1877

PROPOSED ESTABLISHMENT OF A LIBRARY. —On Monday evening a public meeting, which was extremely well attended, was held in the School Room at Sibford Gower for the establishment of a lending library for the parish, consisting of the township of Sibford Gower, Burdrop, and Sibford Ferris. The Vicar, the Rev. Edward T. Stevens, M.A., who occupied the chair, made a report as to what he had been able to effect during the past year towards the establishment of a lending library for the use of all the inhabitants of this parish. He said he had received in subscriptions the sum of £14 7s. 6d. including a grant of £3 from the Society for Promoting Knowledge; had paid £5 7s. 6d. for a neat and substantial bookcase to contain 500 volumes, and had purchased about 130 new, useful, and attractive books, leaving a small balance in hand. He had also to offer 120 additional volumes from the Misses Dix, Miss Mawle, Mrs. Woolgrove, Mr. W. Fox, and himself, in addition to £1 worth of books from Mr. A. Lamb. The property of the library was vested in the Vicar and Churchwardens ex-officio as trustees. An interesting discussion took place as to the amount of subscription to be paid by members ; and as it was held to be very desirable to make it so low that none should be excluded by want of means, it was decided that the minimum subscription should be one halfpenny per week, that tradesmen, farmers and others should pay at the rate of one penny, but that subscriptions or donations in excess of these amounts should be encouraged without being pressed for. It was decided that the library should be opened in January next with a social gathering, to be succeeded by a business meeting to which members only should be invited, and that books should be taken out on Mondays only from 12 to 12.30 and 7 to 8 p.m. The details of the rules were left to be drawn up by the committee, and submitted to the members at the general meeting in January. The Vicar was appointed President, Mr. Geo. Turner, of Burdrop, Librarian, and Miss Dix, Mr. Turner, Mrs. Woolgrove, Miss Stevens, Miss Capper, Miss Enock, Miss Mawle, and Messrs. Enock, Elley, W. Fox, Inns, J. Manning, L. Poulton, and Dr. Routh as members of the committee. The following donations were received during the meeting, viz. :—Mrs. J. Rimell, £2 ; Mr. Wells, £1 ; Mr. Enock, 10s.; Miss Enock, 5s. ; Mr. R. Lamb, 5s. ; Mr. R. Routh, 5s. ; Miss Clarke, 5s. ; in addition to the following :—Dr. Routh, £1 8s. 9d. ; Miss Lamb, 5s. ; and Mr. M. Woolgrove, 2s. 6d. previously acknowledged. A considerable number of names were received of persons desirous to become members of the library, and also promises of donations of books, and money, with nearly 300 volumes of suitable books, including complete sets of the Leisure Hour, Sunday at Home, the National Magazine and Chambers’s Repository, besides some of the best children’s annuals, and books of history and science, several pounds in hand for binding, a good working librarian and committee, a “local habitation and a name,” and the best wishes of all classes of parishioners, by whom it is thought the Sibford Lending Library has made an excellent start. The question of a night club with reading and refreshment room was started by Mr. Routh, of the Friends’ School, but as it was too large a question for the present meeting, it was postponed. The Vicar, however, stated that the establishment of such an institution in the parish had been one of the foremost matters in his thoughts during the whole time he had had charge of it but that the scattered character of the parish made the success of a self-supporting club very doubtful ; and that the experiment could be tried only by those parishioners who could afford it and were disposed to do so, coming forward with a sufficient sum to cover the first year’s expenses. If this were done, he promised his cordial co-operation by giving the Times and the Banbury Guardian, and taking his share with others of the pecuniary responsibility ; but that the whole subject of a men’s and youth’s club combining classes for instruction, library, news room, games, and the supply of non-intoxicating refreshments was too important a one to be entered upon without careful deliberation.