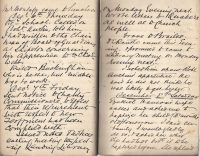 Ezekiel Hancox’s wife called and asked me to baptize her child (18 months old) tomorrow. I said certainly I would gladly do so, and asked her why she had not brought it to be baptized before. She replied that she had not been to church or chapel since some girl told her that I said she could not be in the clothing club and that she was not a church woman. I reminded her that I had been in her house several times since I baptized her last baby and that she had not said a word to me about it. I told her her conduct was very wicked for that her duty was to God. She promised to come to church and send her children to school. She had been brought up to the church and had been confirmed, she said.