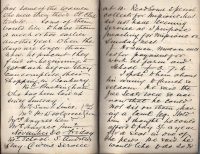 Visited school. St Andrew’s Day. Divine Service at 10. Read some special collects for missions, but did not have evening service as I purpose preaching for missions on Sunday next.

J Horsman, mason, called for payment for work at farm and school £3.7.6. I spoke to him about his coming to church so seldom. He said the free seats were so narrow that he could not sit on them, having a lame leg. I told him I thought he could afford to pay 5/- a year for a seat in one of the pews. He said he would like to do so and so would his eldest daughter who is in service with Mrs Green the Quakeress. I told him he should speak to Mr Woolgrove about the matter and this he promised to do.