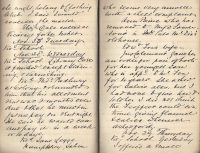 Visited school. Library case is finished except staining and varnishing.

Visited Thomas Padbury at Colony and reminded him that his allotment rent was 2 months overdue and that he must in future pay me on rent night. He said he would call and pay it in a week or 10 days.