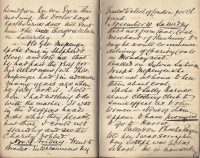 Received note from Cave, Coal Merchant of Banbury, to say he would commence delivery of charity coals on Monday next.

Called on Sylvia Sabin and Joseph Messenger who were not at home to tell them about coal.

Spoke to Sally Barnes about clothing club to same effect as to other women – none of them appear to have promised to go to Harris.

Called on Phoebe Payne, told her I was sorry her boy Joseph was not at school. He is now working for Mr Herbert. He is under 11 years of age. He goes to Miss Dix’s evening class. He was working for Fowler the butcher all the spring and summer.

Visited Widow Cakebread and Mr Elley who is better. Also Edward Holland. Saw a young woman there who he told me was his housekeeper and no relation. He brought her from the workhouse at Banbury with two children, one about 4 years old, the other 6 or 7 weeks. She had been recommended to him by his kinsman who is porter at the Banbury workhouse. His son William( about 28 years old) still lives with him. The cottage is cleaner than I have ever seen it before. But from what I have heard since my visit there, things are not as they should be. There are the two men father and son, the young woman and her two children in two rooms. I saw no provision for sleeping accommodation down stairs.

Thomas Holland called this evening and paid 5/- rent for the coming year for the allotment lately held by James Sabin. He asked me about the little rick of barley and the swedes on the ground. I told him that as I thought James Sabin would pay the rent due, he had better call on Coleman who had bought it and ask him to remove it.