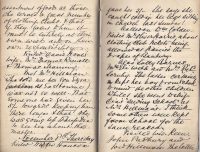 Visited Widow Hancox, gave her 2/-. She says she caught cold in her legs sitting in church last Sunday!

Called on William Golder. Visited Mrs Oliver Harris about Clothing Club tickets being allowed at Harris’s the Draper of Banbury.

Also Sally Barnes, Mrs Eli Webb and Mrs Richard Scruby. The latter certainly kept her boy from school to mind the other children whilst she went to Miss Dix’s “Serving School” at Mrs Hillman’s. I think some others were kept from school for the same reason.

Visited Widow Keene, John Padbury and Widow Hillman. The latter heard from her son Ezra this morning. The doctor says Eastbourne does not suit him and he will therefore return on Saturday.

Old George Messenger spoke to me in Shepherd’s Close and told me that he had paid the rent for his allotment (which Thomas Messenger had) in advance many years ago when he first took it. I told him I had nothing to do with the matter. It was in the Feoffees’ hands to do what they pleased, but that I could not stand by and see the charity robbed.