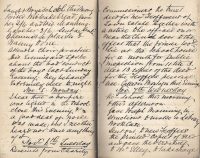 Visited school this morning and this afternoon.

Sent out to new Feoffees the printed copies of deed and gave the deed itself to Mr Elley to take charge of for public inspection.

In answer to a question respecting the New Code needlework Mrs Elley said her children could manage it very well, but that certain materials would be required. I told her to let me know what she wanted and I would get them, or she might get them and I would pay the bill.

Harris, draper of Banbury, wrote asking me to let him have a share of the Clothing Club business, and mentioning Mrs Oliver Harris, Mrs Eli Webb, Mrs Edward Scruby, Mrs George Payne, Mrs Joshua Dale, Mrs Thomas Barnes as “having expressed their preference voluntarily of going to him”.

I called on Mrs Thomas Barnes, not at home, Mrs Dale who said she had not promised and was very well satisfied with Hiatt of Hook Norton, and Mrs George Payne who said she had not made Harris any promise. I told them all I was willing to help Harris as he was a Sibford man and an industrious respectable fellow but that he had only a small shop and a by no means so good an assortment of goods as those who served a great number of clothing clubs and that if they went to him it must be entirely at their own wish and on their own responsibility.

Met Mrs Hillman who told me her son Ezra (at Eastbourne) was not so well. That someone had given her 5/- towards keeping him there longer and that she was going up to Miss Dix to see her about the matter.