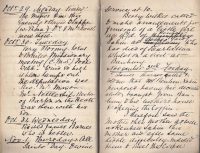 James Barnes called and told me that Reuben Sabin purposed having his deceased child brought from Banbury to his mother’s house and opening the coffin.

I therefore saw the mother and her mother as well as Reuben Sabin and his mother and after some little difficulty induced them to meet the corpse at the church gate. This was done, the funeral taking place at 2 o’clock instead of 3.

Reuben Sabin urged as a reason for his not being prevented from having the remains of his child brought to the house that William Webb the postman was not prevented from going about delivering his letters, although he had several children at home suffering from scarlet fever. I made of course the obvious reply.

Visited Miss E Dix this evening, and her Evening Class of boys in her kitchen. She had 9 boys there who were writing from dictation on slates. I suggested books, especially for the better scholars among them.

A boy Spicer was there only 9 years of age. I told him I thought he should be at school in the day.

Edward Holland came about allotment lately held by James Sabin. He could not pay the money but promised to do so on Saturday. week.