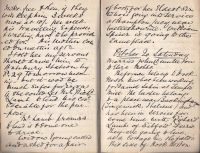 Married John Dumbleton and Eliza Mobbs. The former belongs to Hook Norton but has been working for Daniel Sabin at Temple Mill. The latter belongs to a place near Buckingham (Tingewick, I believe) and has been in service for some time with Richard Lamb of Sibford Ferris. They are going to live at a cottage in the fields this side of Hook Norton village, but in Hook Norton parish.

Canon Payne called this afternoon to bring a letter intended for me but addressed to him at Sibford. It was from a Mrs Cook, Hillmorton House, Hillmorton, Rugby, asking the character of Sylvia Fardon whom she had engaged as a servant. I replied to the effect that she and her parents were respectable persons but that I knew nothing of her capabilities as a servant.

John Prophett of Sibford called in response to a note I had sent him and I let him Sibford Ferris allotment no. 16, lately held by Charles Lines. I read the rules to him and he said he quite understood and would take care not to break them.

The Hospital offertory amounted to £7.3.6 as follows: