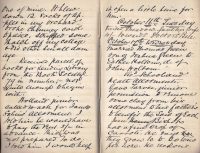 Visited school and Heath allotments. Gave Tarver junior permission to remove some clay from his allotment to his father’s to benefit the soil of each.

He asked me whether I should turn him out of his allotment because he had taken a few acres of ground near bottom of Pitch Hill. I told him I should not. But if he took a farm it would be a different matter.

Visited John Coleman this evening. He has bought the crop on James Sabin’s allotment and thinks it would not be right to seize it for the rent. I told him he had better not remove it for a few days. He says James Sabin is not likely to pay unless forced to do so.