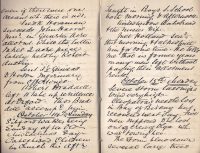 Cleopatra’s needle lost in Bay of Biscay but recovered next day. Five men supposed to be lost out of crew of Olga which was towing her.

The storm blew down several large trees, one of mine. It blew down 12 sacks of apples in my orchard, broke chimney cowl to pieces, stripped some thatch off my cottage and did other small damage.

Received parcel of books for Lending Library from the Book Society – 79 in number; not quite enough to begin with.

Holland junior called to ask for James Sabin’s allotment. I told him he would have to pay the rent 5/- in advance. This he was not prepared to do. I told him I would keep it open a little time for him.