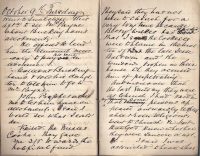 Went to Swalcliffe this afternoon to see Mr Payne about Buckingham’s allotment. He offered to lend him the amount necessary to pay his rent in advance. Called at Buckingham’s and told his daughter to tell him to go to Mr Payne.

John Prophet asked me to let him have an allotment. I said I would see what I could do.

Visited the Misses Cooke. They gave me 2/6 towards the hospital fund. They said they had not been to church for a very long time because Betty Wilkes had reported that I said the Cookeses were to blame in the matter of the late Jesse Baldwin and the windows broken in their house which they accused him of perpetrating. And moreover that the last Sunday they were at church I had said in my sermon that some persons appeared outwardly respectable and even religious, went to church etc, but that God knew whether they were sincere or not, etc.

I said I was astonished to hear what they had just told me and that I thought their conduct in staying away from the House of God because they thought they had a grievance against me was very wicked indeed. They promised to come to church in future.

Harvest Thanksgiving Service at Swalcliffe this evening. Rev Mr Clarke, rector of Odiham preached. Mr Payne asked me this afternoon to stay to dinner and attend the service. I said I had already dined, that I must return home, but that if I could come down to the service in the evening I would. I went down but was late and therefore occupied a pew at the back of the church.

Mr Cookes of Tadmarton, Montagu of Epwell, Gerahty of Shutford, Payne, the curate of Adderbury were present. Some of my choir assisted with the singing.

Church congress opened at Croydon under presidency of Archbishop of Canterbury. Mr Smith of Brailes went. I could not go, being detained by a pupil. R Braddell.