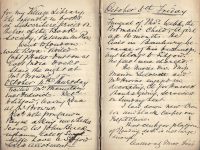 Funeral of Thomas Webb the Postman’s child, a girl age 16 months. He lives in Banbury because of his business, but belongs to Sibford. No fees were charged.

I laid down new crimson and black carpet on pulpit stairs. That sent for platform of reading desk is not large enough.

Called at Miss Dix’s. They have obtained through Miss Morris of Swalcliffe a letter to admit Ezra Hillman to the Convalescent Hospital at Eastbourne, and have collected some money towards his expenses. I signed the letter to make myself responsible for his removal, etc and said that I would make up any deficiency in amount for his travelling expenses and washing.

Applied to S.P.C.K. for a free grant for Village Library and sent it to the District Secretary Rev J Rigand of Magdalene College, Oxford, for signature of recommendation.

Wrote to Mr Payne and said I would do the best I could for Buckingham in the matter of the allotment.

Marked books on list of “Book Society” for Miss Wollaston’s grant and some in addition. Sent it up to Rev I Vale Mummery, the Secretary.

Distributed printed notices of Harvest Thanksgiving and Collections for Hospitals on Sunday next.

Visited Dr Routh; spoke to him about Ezra Hillman. He says he has one lung in the hard and useless condition which precedes decay and that a warmer climate night cure him. Spoke also about Joshua Lines’s wife. He says she must not have an elastic stocking – and that when she does require one he has only to write an order and the parish will supply it.

Buckingham called this evening about allotment. I had previously called on his wife.

Visited Joshua Lines’s wife. Told her what the doctor had said about the stocking. She said a lady had promised to get her one. I gave her 2/6.

Visited Mrs Hillman and her son Ezra and spoke with them about his going to Eastbourne and the desirability of his emigrating to Australia to save his life.

Loggin rent night. All tenants paid in the room except R Scruby. He came to house afterwards.