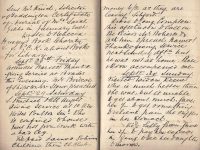 Visited Widow Keene who is much better than she was, but is unable to get about much. Gave her 1/- to get something to relieve pain she suffers in her stomach.

Visited Sally Green. Gave her 2/- to pay her expenses in going to see her daughter tomorrow.

Saw Ada Grimbly, also Mrs Dix who has taken up her abode with Mrs Shelswell, her sister in law.

Visited Fox who married William Webb’s daughter recently, but no one at home.

Visited Mrs Lively and asked about her son a carpenter in London who is ill. She says he is at Guy’s Hospital having undergone an operation on the kneecap, and is going on well.

Visited Mrs James Rimell, to enquire after her daughter Gertrude who is now at school at King’s Linn and is very happy and well.

Banns of Marriage published between Thomas Green, Bachelor, and Esther Holtom, Spinster. Both of this parish.

Commenced this afternoon to chant the Psalms in church as a regular thing the last Sunday in the month.