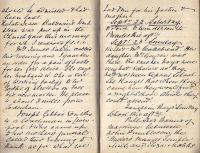 Visited Mrs Cakebread. Her daughter Mrs Geydon was there. She said her boys were very bad scholars as they had not been kept at school. She thought that when they came here they would find a night school which they could attend.

I taught in Boys’ Sunday School this afternoon.

Attended choir practice this evening. The men present were Haines, Manning, Horsman and Harris. The boys were Tay and John Manning.

Told Mr Elley that I thought he would not be able to hold school this week, as the harvest was not gathered in.

Some of my parishioners, especially Misses M and S Dix, would like the Harvest Thanksgiving Service on a week-night. Mrs and Miss Mawle and Mr Woolgrove think it is better to have it as has always been on Sunday. The services have been so hearty and the collection so good on Sunday that I feel unwilling to make any alteration lest harm should accrue.

Visited Mrs Mawle and conversed with David Hone and his wife for some time at their door.

Sent sherry yesterday and whiskey today to to my servant Percival Webb’s wife who has been ill the past 5 or 6 days and under the doctor’s care.