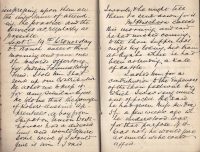 Dr Routh called this morning and gave me 5/- towards offertory for Indian Famine Relief Fund. I told him I had sent up our contribution. He asked me to keep it for any similar object. He told me that the younger of Robert Austin’s apprentices, a boy from Shipston Union Workhouse had a diseased lung and would require some wine if I would give it him. I said I would, and he might tell them to send down for it.

Mr Hitchcox called this morning and said he had missed coming to the choir supper last night by losing his train at Aynho where he had been attending a sale of cattle. I asked him for a contribution to the expenses of the choir festival by which I was very much out of pocket. He said he had given Miss M Dix 5/- a few weeks ago which he understood was for that purpose. If it was not, he would give me as much as he could afford.