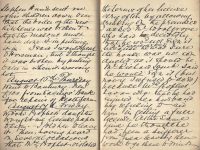 Widow Prophet’s daughter brought me license paper to sign. I told her to leave it. Then, having heard on several occasions that Mrs Prophet violated the terms of her license very often by allowing drinking on the premises I asked Mr Woolgrove who said decidedly that he would not sign it if he were asked because he was sure the house was not conducted as it should be. Mr Richard Lamb said he would sign it (but not if I refused to do so) because Mrs Prophet had an idea that he had injured her husband by refusing to aid him in getting a full license. At the same time he thought he had been a sufferer from his men leaving their work to go there to drink. Mr Richard Routh said that he would on no account sign it.

I sent for Mrs Prophet to call on me in the evening. When she came I cautioned her and signed her paper, telling her that if I refused to do so at any time on account of disorder etc at her house she would not be able to get anyone to sign it and would lose her license altogether.